The A to Z Culinary Terms Every Chef Must Know 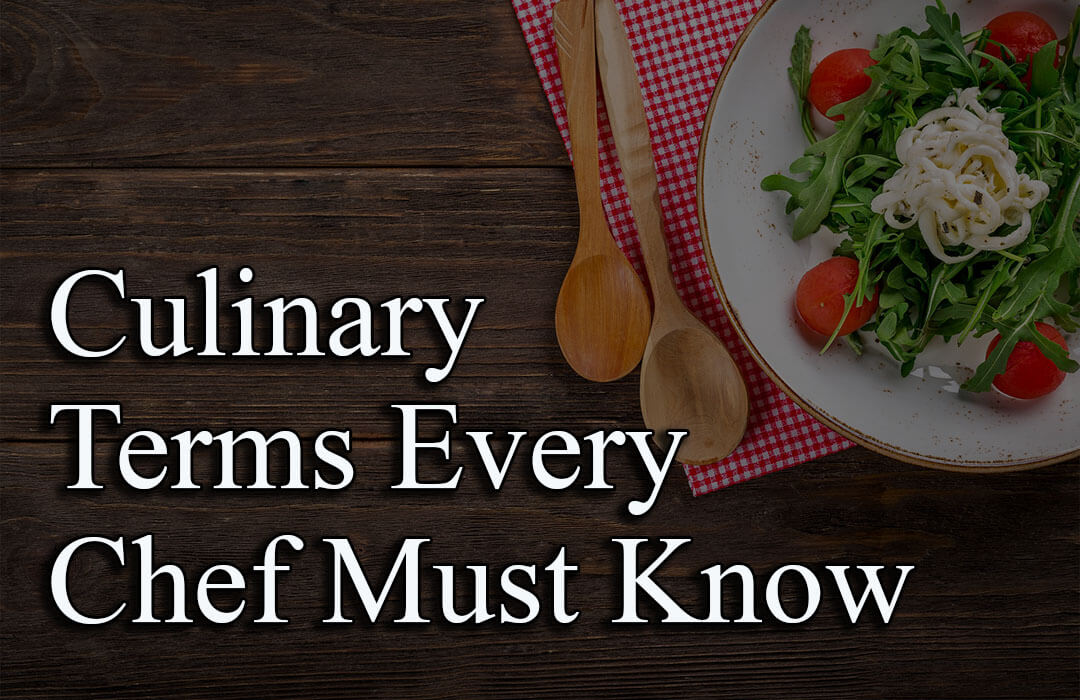 If you are looking for a comprehensive list of culinary terms to perfect your mettle as a culinary expert or even just to start off with basic culinary terms, well, you have found yourself in the right place. If you are an amateur chef, a home cook, or a restaurateur, you should be fairly acquainted with this ever-growing list of the most important and commonly used culinary terms.

We have compiled for your accuracy, an a-z list of the French culinary terms and their definitions, to ensure your awareness about these cooking terminologies. This here is basically your sanctum and culinary arts dictionary which deals with culinary techniques, knives, cuts, ingredients, preparation methods, etc.

Tip: On your keyboard press “Ctrl + F” to toggle the search box from your browser. Type in the term you are looking for and press enter.

Aerate – To mix or incorporate air into ingredients to make them puffier and lighter, for example, aerating egg whites.

​A La Carte – A menu at a restaurant, where each food item is separately priced and is not part of a meal plan.

​Al Dente – Literal translation of the French cooking phrase means “to the tooth”. Refers to pastas in general to define their cooked state which has a bite; not too soft.

​Acidulation – Adding lime juice to make something sour or acidic.

​Au gratin – A French culinary term for a cheese or bread crumb topping and browned by baking.

​Au jus – A French term of cooking which refers to steaks and meats cooked in their own natural juices.

​A Point – Gourmet term for cooking something, mostly meat, till its correct state of doneness; cooking a piece of meat till it is medium rare.

​Aioli – A mayonnaise made with garlic popular in French cuisine, often used as an accompaniment. Bain Marie – Two containers or kitchen utensils being used as a double boiler or a hot water bath for slow cooking ingredients.

​Bisque – A smooth, creamy crustacean soup made especially with seafood like shellfish.

​Braising – A method used to prepare meats by slowly cooking them in a sealed pan over very little liquid after searing it at high temperature.

​Beurre blanc - French sauce made out of butter, shallots, wine or vinegar and usually accompanied with seafood.

​Ballontine – A cooking procedure for poultry wherein a leg piece is stuffed with meat and slowly braised with the bone removed.

​Bechamel – A classic French white sauce made with roux and milk.

​Brine – A natural preservative for soaking meat, made out of salt and water.

Concasse – A French culinary term referring to chopping of ingredients like tomatoes and herbs to prepare them to be served with other ingredients.

​Confit – Usually refers to a preparation of duck, wherein, the meat is slowly prepared in its own fat and juices.

​Coulis – Generally refers to fruit purees and sauces that are served as garnish with desserts.

​Croquette – Small balls of vegetables or meat coated with egg whites or breadcrumbs or both.

​Chiffonade – Finely shredded or chopped leaves and herbs used as garnish in soups.

​Coring – The process of removing the core or center of fruits for certain food preparations.

Debone – Removing the bones from meats before cooking.

Deglaze – Removal of “glaze” or caramelized residues from a pan to flavor meats and steaks.

Dress – To prepare a cut of meat for cooking by trimming it and applying oil or salt on it.

Dredging – Coating moist food ingredients with dry ingredients like breadcrumbs before frying them.

Degrease – Trimming off excess fat from the surface of sauces and soups.

Emulsion – A combination of two wet ingredients that do not generally mix together, like oil and water.

Egg Wash – Egg mixed with water, coated over pastries before baking to add gloss and color.

Essence- Liquids with strong aromas that are used for enhancing flavor of cakes, desserts, etc.

Espagnole – A classic French brown sauc﻿e made with Mirepoix, tomatoes and brown stock.

Emincer – Thinly sliced ingredients, though not as long as julienne.

Entrée – The third course of a full French menu. Fillet – Removing the bones of a side cut of fish.

Frenching – Refers to the trimming and cleaning of bones of lamb racks and poultry.

Flambe – Creating flames by addition of brandy or other alcohol, adds depth of flavor.

Foie Gras – French cooking term for liver of geese, duck or other poultry flattened out.

Fondant – A sugar coat made for decorating cakes, pastries.

Gazpacho – A cold soup made out of cucumbers, tomatoes, onions.

Gelato – The Italian word for Ice Cream, and is much denser in consistency.

Glaze – A substance obtained by reducing stock which has a thick, viscous consistency.

Harissa – Popular in Lebanese and Middle Eastern cooking, it is a spicy chili paste.

Infusion – A process of imbuing a substance with another’s flavor and aroma.

Icing – Made out of egg whites and sugar to frost cakes.

Jacquarding – A French cooking verb, it is also called needling and refers to poking holes in meat in order to tenderize it. Kirsch – An un-aged, aromatic brandy which is made from fermented cherries.

Larding – Insertion of fat slices into a piece of meat to keep it from drying out.

Marinate – Seasoning food ingredients by soaking them in aromatic ingredients to prepare them for cooking by adding flavor.

​Mince – Chopping up meat or vegetables into very fine pieces.

​Mise en place – French gourmet term, for preparing or readying ingredients, before one starts cooking with them.

Nappe – The consistency of a liquid which coats the back of a spoon, like in the case of a demi-glace.

​Neige – A French culinary term for egg whites which have been whipped to form soft peaks.

​Needling – Poking into ingredients to inject fat or flavors into them

Ouef- The French word for “egg”.

Ouzo – Liquor from Greece that has a special anise flavor and aroma.

Parboiling – Process of blanching and boiling dense foods like carrots in water to partially cook them.

​Parcooking – Partially cooking food ingredients so that they may be cooked to perfection by heating later.

​Polenta – An Italian porridge made from cornmeal.

​Praline – A sweet or savory shard of nuts cooked in caramelized, boiling sugar which is crispy and brown.

​Paupiette – A thin meat slice, generally fish or poultry, which is stuffed and rolled and is cooked by poaching. Remouillage – The process of using meat bones a second time for preparing a weak flavored stock.

Render – To extract liquid fat out of solid meat pieces.

Roulade – French term for a slice of meat, usually skin, stuffed with meat or vegetable stuffing and rolled.

Roux – A thickening mixture made out of equal portions of flour and butter, used in sauces and soups.

Saute – A cooking method in which food is quickly cooked over direct heat with some butter and oil.

Searing – Directly cooking food over heat while forming a crust by cooking at high temperatures.

Scald – To heat milk or similar liquids just below their boiling points.

Steep – To soak dry ingredients in hot liquids until the liquid completely absorbs the flavor.

Staling – The process of becoming stale due to lack of moisture.

Sweat – Extracting flavors from ingredients by cooking them over low heat in covered pans without browning.

Tempering – Slowly adding hot liquids into eggs while continuously stirring while keeping the eggs from curdling.

Tourner – Shaping vegetables by and while peeling them.

Trussing – Tying parts of meat before cooking with the help of a string.

Unleavened – Culinary term used for describing bread made without leavening agents like yeast.

Veloute – A classic French sauce made with chicken stock.

Vinaigrette – A very basic seasoning and flavoring agent generally used with salads and made out of oil and vinegar. Whip – To beat food ingredients in order to incorporate volume and air into them.

Whetstone – A grained, dense stone which is used to sharpen knives.

Xanthum gum – A water-soluble food additive that is used as a thickening agent.

Yoke – A basic cooking term for a binding substance.

Zest – Shredding or cutting the outermost covering of citrus fruits like oranges or lemons which have aromatic oils.

How many culinary terms did you learn today? Want to learn and test yourself some more? Learn some more culinary terms here and some gourmet definitions and skills here.

​Oh, since we are talking about culinary terms, here is the 15 common food terms you're probably pronouncing wrong: