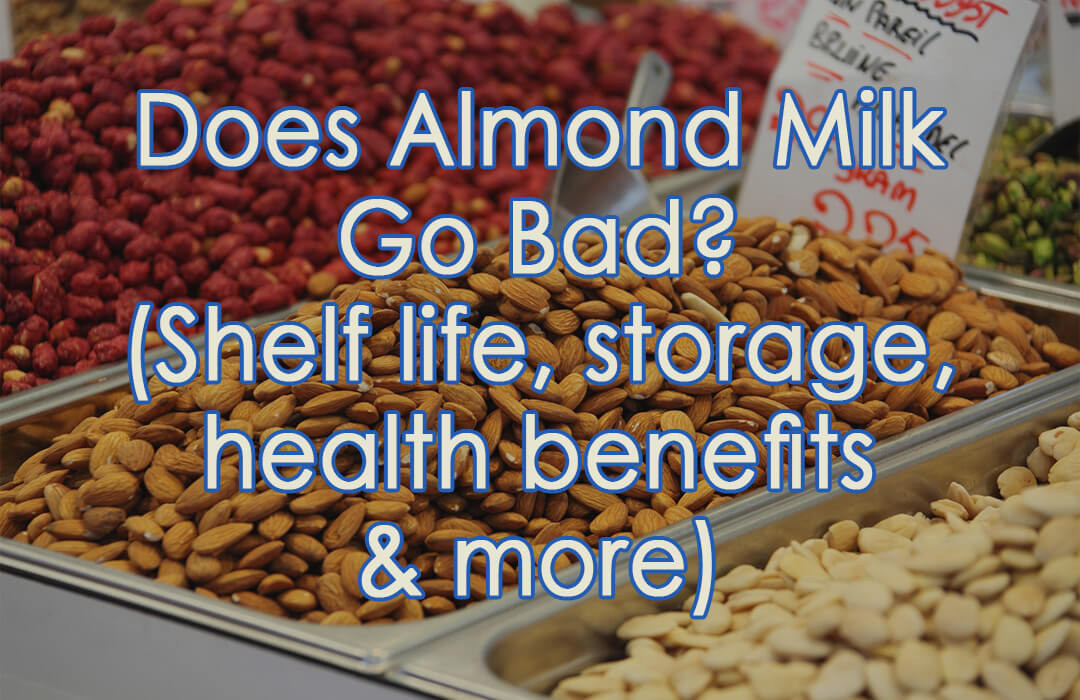 Almond milk is a plant milk made from almonds, and just like soy milk, it is free from cholesterol and lactose which makes it suitable for people who are lactose-intolerant. If you're planning to add almond milk into your daily diet, then it’s best to learn more about almond milk like whether does almond milk go bad, storage, how to tell if almond milk is already spoiled and more.

What is Almond Milk?

As explained here, almond milk is a plant milk that is easily made by grinding the almonds and water in a blender and then strain the almond pulp or flesh out with a strainer. Commercial almond milk comes in different choices such as sweetened or unsweetened, plain, vanilla and chocolate flavor and they are usually added with vitamins and nutrients.

Almond milk used to be a niche healthy food item, and it wasn’t until the early 2000s, its popularity started to increase. In the United States, the sales of almond milk grew by 79% in the year 2011, and by 2013, it has overtaken soy milk as the preferred choice plant milk.

In some areas of Italy, specifically in the regions of Sicilia, Puglia, Calabria and Campania, almond milk is a traditional agricultural product that is protected.

Just like any other milk, dairy or non-diary, almond milk does go bad especially when it is not properly stored. The quality of the almond milk will deteriorate in terms of flavor and texture, and as we proceed further, we will be talking about the shelf life and how to store almond milk properly to extend its shelf life.

How to Store Almond Milk?

The key to ensuring your almond milk last longer is by making sure that it is stored in a dry, cool and dark place. Continuously exposing the almond milk to external factors like air and sunlight will have harmful effects on the taste or flavor and consistency of the almond milk.

Usually, an almond milk bottle or pack will come with a label indicating if the milk should be refrigerated or kept in the pantry but if it is not stated, it is wise to just keep almond milk in the fridge as an ideal choice for storage.

If the bottle or pack has been opened and you did not finish using it, then it is definitely a must to keep the remaining almond milk in the fridge because it will spoil very fast if you leave it out in the kitchen or pantry at room temperature.

Make sure that the lid of the almond milk container is seal tightly before putting it back in the fridge to ensure that no contaminants can get it and ruin the taste and texture.

F﻿﻿﻿﻿reezing al﻿﻿﻿﻿mond milk for an even longer shelf life can also be done, but it is not recommended on the commercially manufactured almond milk.

Check out this post for 'Does Almond Milk Go Bad? (Shelf Life, Storage, History and More)'

How Long Can Almond Milk Last?

If you check out your grocery store or supermarket for almond milk, you will notice that most of the manufacturers will indicate that it is safe for consumption 7 to 10 day after opening the container.

However, some will mention that it is possible for the almond milk to stay good after ten days, but we do advise that you do some due diligence to check and confirm that the almond milk isn’t spoil after the ten days before consuming.

As for the unopened almond milk, just refer to the “use by” or “best before” dates on the container of the almond milk to determine when is the expiry date.

Of course, it does not mean that the almond milk will spoil right on the date stated but it just merely means that the manufacturer will not give an assurance on the freshness beyond the stated date.

It really depends on how well you keep or store the almond milk; it is possible that the almond milk could still be safe for consumption weeks after the stated expiry date if properly kept.

Another thing to take note is that some almond milk comes as a shelf-stable, meaning it is okay to store them in the pantry at room temperature as long as it is unopened. Whereas, some others are only suitable for refrigerated conditions and should be kept in the refrigerator after purchased.

How to Tell If the Almond Milk is Bad? There are a few indications to look out for when it comes to determining if your almond milk is spoilt or not.

The first thing you could look for is the texture or consistency of the milk. If there are signs of lumps in the milk, it is almost sure that the milk is not as good as it used to be.

Another way to find out is by pouring a bit of the milk into the sink to check the consistency, or what we would usually call “slime test.” If the milk doesn’t flow as smooth as it used to be, then it is also most likely spoil.

The second thing to look out for is the smell of the milk when you open the bottle. If there is an odor or the milk smells sour, it is also another sign that the almond milk has gone bad.

If you are still not sure or would like more confirmation, you can go ahead and take a small sample of the almond milk and taste test it to know if it is truly spoilt.

Don’t worry because a little or small amount of almond milk will not make you sick or cause food poisoning, but it is definitely the most assured way to determine if the almond milk has gone bad or not.

So now that your question “Does Almond Milk Go Bad?” has been answered, you may now purchase or make your own homemade almond milk with a peace of mind knowing what to do and what not when it comes down to the quality or if the milk is just safe to consume.

Finally, do take note that although almond milk has a lot of benefits for your health, it is not a direct replacement for cow’s milk as it contains far less protein and calcium provided by the dairy milk. But it is still a fantastic option for vegans or those who do not take dairy products.