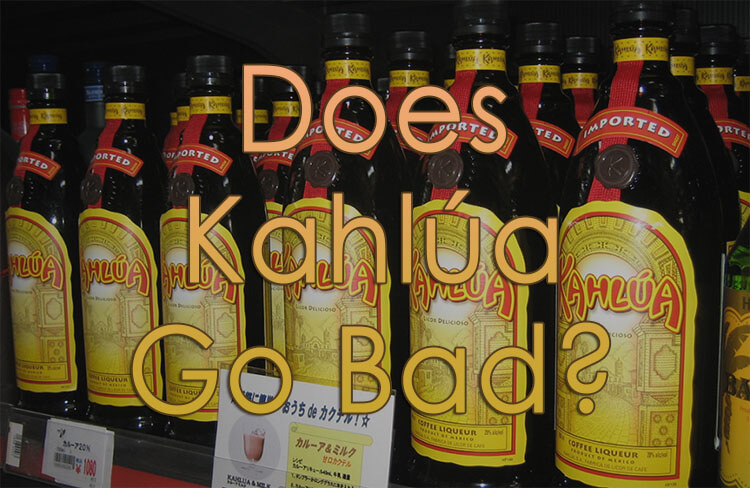 Kahlúa originated in Veracruz, Mexico in 1936, is known as one of the top bestselling coffee liquor in the world. While alcohol usually can last for a long time but does Kahlua liquor has the same long shelf life? This begs the question does Kahlua go bad after some time? In this post, we will go through the shelf life, storage, health and more.

Quick Navigation
Does Kahlua Go Bad?
The Proper Ways to Store Kahlua
The Shelf Life of Kahlua
How to Tell If Kahlúa Has Gone Bad?
Always Watch Your Serving Size
Fun Facts About Kahlúa
Final Thoughts Are you a coffee and alcohol enthusiast? If you nodded yes, Kahlua will then suits your pellets perfectly! The coffee flavored, rum-based liquor that grew to popularity for its unique taste that is popular for both as alcoholic beverages or uses in baking!

So, does Kahlua go bad? The answer is YES, IT DOES but because Kahlua consists of 20% alcohol content which is safe from going bad for at least several years. However, Kahlua will eventually lose its quality over the long period or when it is not kept in a proper way. Continue reading to find out the shelf life and how do you store, as well as interesting facts about Kahlua.

The Proper Ways to Store Kahlua

After use, do remember to clean around the bottle neck, cap and mouth on each use with a clean damp wipe to prevent the little amount of leakage would lead to fruit flies and other possible contamination, though.

Just like our previous post about c﻿﻿hampagne shelf life﻿﻿, for instance, Kahlua whether opened or unopened should be kept away from direct sunlight and heat exposure. These aspects would be the reason causing the quality of the sugar-based liquor goes bad quickly.

Although Kahlua does not require refrigerated after open, but it is recommended to keep Kahlua in a cabinet, wine cellar or pantry where it is dry, dark and cool place to preserve its quality well.

The Shelf Life of Kahlua There are actually quite a few different statements on the Kahlua shelf life. Some reported the Kahlua was perfectly fine after being opened and unrefrigerated for 7 years while the Kahlúa producers stated the shelf life is approximately 4 years (this is a general guideline, and it is highly recommended that you adhere to it).

The four years best-before-date does not mean that the Kahlua is completely going to waste, but it means that there will be noticeably loses in quality and flavor once exceeding the provided period of time.

As mentioned above, Kahlúa is sugar-based liquor which could lead to spoilage when it is not well taken care of. However, the best way to keep a reminder of the exact opening date is to place a sticky label on the Kahlua bottle to prevent over stored it.

How to Tell If Kahlúa Has Gone Bad?

There is no exact answer on how to really tell if the liquor has gone bad or not. The best way you could do are using your visuals, sense of smell and taste buds. To check if the Kahlua has gone bad is pretty much similar to checking on any other alcohol products. First, you identify the smell of the Kahlua whether it smells unpleasant, if it does smell funny then you should discard it immediately.

What if you are unable to tell if the smell was off due to its strong coffee syrupy aroma? Pour a little amount out from the bottle to a clear see-through glass, spot any residue floating around or if there are discolouration, then you should not be consuming it but again, discard it right away.

Again, does Kahlua go bad? As mentioned before, an opened bottle of Kahlua will eventually lose its quality and taste after being stored for several years (4 years), and it does not mean that the liquor has completely gone to waste. What I would suggest is to consume the Kahlua as soon as possible once it was opened. Why would you keep if for that long? After all, Kahlúa is King!

Check out this post for 'Does Kahlua Go Bad? (Shelf Life, Storage, History, and More)' Do not over consumed Kahlúa as it contains high calories count and these calories derived from carbohydrates that were used to make the liquor.

Kahlua comes in seven different varieties including Original, Especial, French Vanilla, Mocha, Hazelnut, Peppermint Mocha and Ready-to-Drink. According to nutrition facts that there are 11 to 11.5 grams of carbohydrates per ounce, which means that most of the carbohydrates are from the sugarcane and other flavoring ingredients that were used in the making of Kahlua.

As we are all well aware that carbohydrates provide essential fuel for our body and other form of health benefits, they could also be a potential risk to your health if you consume too much of it.

Extra calories could lead to weight gain, raising levels of triglycerides in the blood system which associated with coronary heart disease, diabetes, and fatty liver disease according to University of Massachusetts Medical School.

Furthermore, based on scientific research, by consuming sugar loaded beverages with alcohol at the same time has had increased evidence associated with high blood pressure, chronic inflammation and cardiovascular disease.

Should you be putting your own health at risk? No, I don’t think so. Remember that the serving size is important.

According to a story, on 1936, the Kahlúa company was all started by four friends who were tired of their “day jobs,” and decided to make coffee alcohol, and Kahlúa was born that year in Mexico.

After years, Kahlua had slowly grown its popularity among communities and around the world. In 1960’s, the company of the Kahlua was led by a team of entirely females, and during that time in the history, this was extremely rare or unheard of.

However, it took seven long years for a bottle of Kahlua to be produced, including the time to grow the coffee beans. In 1977, the B-52 shot that uses Kahlúa as part of the mix was born in Canada and ever since it was spread rapidly across the world and the B-52 shot is still a well-remembered alcoholic beverage.

If you ever wonder how to make your own B-52 shot, watch this short video:

Also, here are other delicious drinks you can do with Kahlua too:

Does Kahlua go bad? Now you have mastered the answer to that. Not just only you know how to store the liquor and its shelf life properly, but as well as you could simply grab Kahlúa from your pantry (if you have any) and make your very own B-52 shots and have a taste of this superb drink! Again, bear the serving size!